I participated in 2015 in the Innovators’ Program at Node Center. Below is a summary of it written by Perla Montelongo and Lauren Reid.

The aim
The group of 7 ‘innovators’ from fields of art, education, neuroscience, physics and psychology came together in mid-August for two months to create a tool to strengthen ways of thinking divergently. The Program was based on the belief

that there was something valuable in artistic thought that could be applied to everyday life and other disciplines. We first started with research into whether there are commonalities in the way that artists think. We gave this way of thinking the working title: ‘art thinking’. Following this, we developed out aspects of art thinking that we felt could be useful in education and everyday life.

The structure
The overall program schedule was formed as a loosely adapted version of the design thinking method. Design thinking is a process that follows a structure of hands-on user-focused research, prototyping, testing and redoing over and over to reach a refined result.

First steps
As a first stage, we began researching texts on creative thinking and perception, particularly from the fields of neuroscience and psychology. In addition, we interviewed artists and creative people in order to find out commonalities in how they think. We also made an open-call survey to see whether there was a difference in thinking between artists and non-artists. From this we reached 90 people from different locations across the globe. 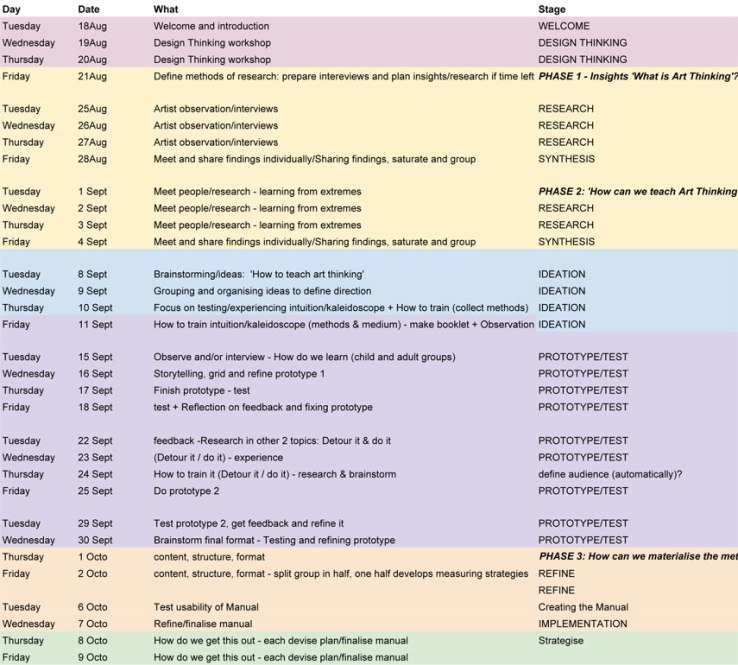 Result: These three approaches of research, interviews and survey gave us a general map of commonalities and differences. In particular, the survey highlighted important factors such as the tendency for artists to rely on intuition and their value in going against conventions.
Weakness: The interviews were short and difficult to verify whether their responses reflected real behaviour or rather their self-perception. In the outcomes of the interviews we found as many differences as we found similarities in the thought processes between artists and non-artists. We should have immersed ourselves more in the daily habits of artists and made a long-term, first-hand observation of their routines to understand on a deeper level how they think, perceive and generate ideas.

Despite our strong findings in the survey of the connection between artists and intuition as well as going against the grain, it is impossible for us to measure the reality of these responses. It is however interesting to see that artists perceive themselves to be using intuition and breaking with conventions more frequently than others.

Finding direction
Following from this first mapping, four key components of the way that artists think that could be useful within education and everyday life were extracted:

• Seeing – using multiple perspectives and ways of seeing the world
• Feeling – using intuition and trusting the senses
• Detouring – using abstract, non-linear ways of thinking
• Doing – an impulse to do and build regardless of its use or logic

First prototypes
From these four key components we started creating different prototypes that were designed to train them. These prototypes were in turn developed and refined during the program based on tests by possible users.

The first rough prototypes came in two formats: as a workshop and an app. After feedback from the test users we merged the things that worked in both prototypes to create a final one. 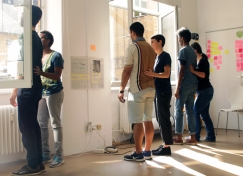 Final prototype
For the final prototype, the team developed a tool named TILT for teachers to insert into their classes or workshops. TILT was designed to disrupt the usual class rhythm and create a playful collaborative atmosphere that heightens intuition, confidence, lateral thinking and engages the senses. This tool came in the form of a web platform with modules related to topics within intuition, lateral thinking, shifting perspectives and perception that can be linked to a class subject. The modules contain interactive videos, hands-on activities related to the topic and further research resources. 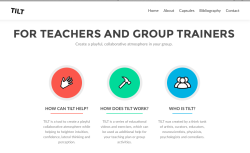 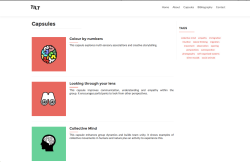 Results and future plans
This platform is still in the prototype phase and not ready to be sent out to the public just yet. Our intentions are for the tool to be beneficial and provide effective and lasting change in the individuals who use it. We can only find out which elements work byundertaking further testing, gaining feedback from the actual users and following up on their development as well. We will be testing it in a high school in Puebla, Mexico in October and in New Delhi by one of our innovators as well as in Tokyo in December.

However, we are not yet convinced that the prototype that we developed is the best form for our intentions and TILT may not be the final outcome. Instead it will be a starting point that will give us directions into which elements work and what can be transformed into something for public use in future. With that in mind, we will come back together in November to rethink our approach. With all of the different profiles of our innovators, we developed many ideas and thoughts that were placed to the side along the way in order to focus on one prototype. We now need time to let our thoughts settle and perhaps return (either collectively or individually) to some ideas developed during the program that didn’t go through the production phase. We will beproducing a reflection on our outcome and processes in the coming months as well as developing the present prototype into new forms in future.

So stay tuned! We are very excited with how far we developed together in just two months and are very much looking forward to the next chapter of the work of the Innovators 2015. You can get an idea of how we progressed and worked together each week on our blog here.